The oldest passenger vehicle in the BPSWA’s collection is a wagonette (or “little wagon”) horse bus, common in metropolitan and country towns from the 1890s to the 1920s. The vehicle likely dates from the early 1900s and was gifted to BPSWA in December 2005 via a National Trust (WA) “Deaccessioning Project”. It came with the comment: “probably used in the Bunbury Area”.

Little is known for certain of the origin of the vehicle. On disassembling and cleaning, the steel axles were found to be stamped “J. Rigby and Sons, 1906”. John Rigby and Sons were axle manufacturers and metal workers in Wednesbury, near Birmingham, who had agents in Australia. The timber work is English Oak and Ash and may well have been built in Bunbury by a local carriage and wagon building firm, using imported timber and metal fittings. Horse drawn wagon and vehicle builders and repairers were common in W.A. country towns, in especially the South West and Great Southern regions. The agricultural and timber sectors relied heavily on horse drawn vehicles and machinery for their livelihood.

Photos exist of an identical wagonette taking part in a parade in Bunbury in 1955. It carried licence plate BY 177. There is also an earlier (undated), side view of the same vehicle in which one can just make out the signwriting: “Bunbury City Drag”, together with two indecipherable telephone numbers. ‘Drag’ was a common term for a horse drawn vehicle or agricultural implement at the time.

Around 1905, a Mr. M.J. Kelly, trading as the Bunbury City Livery Stables, began advertising his services in the Bunbury Herald as a Royal Mail Carrier, Lime and Coal Merchant, and General Carrier. The advertisements stated he was a Cab Proprietor and Forwarding Agent, with ‘All classes of vehicles for hire day and night. Telephone 77’. In 1917 he added ‘Car Proprietor’ to the advertisements, moving with the times to include motorised transport in his diverse activities. It seems likely, therefore, that Mr. Kelly was the operator of the wagonette horse bus, or at least an identical one. The flexibility of the wagonette would have suited the range of his activities – passengers to and from the railway station and wharf, weddings, picnic parties and sporting events. Off peak, the wagonette could be used around town for deliveries.

The wagonette horse bus is one of the oldest, preserved town passenger vehicles in Australia and in 2015 the BPSWA Council began the daunting task of dusting off the accumulation of years of storage to return it to static display standard. Most of the timber bodywork was reasonable after 100 years, but the timber wheels proved to be unrepairable. The metal tyres were in need of rebuilding or replacement, the passenger floor had warped, the canopy frame was beyond further use and its canvas cover was coming apart. A complete repaint was needed.

Specialised wheelwright skills, timber body and canopy repairs were beyond the scope of our volunteers and the facilities at the workshop, so BPSWA turned to the advice, experience and work of a local coach builder and vehicle restorer, David Mosley.

New timber wheels were built from a scarce, seasoned slab of Australian hardwood by David at his workshop in Naval Base. Replacement or refurbished metal tyres were fitted and the timber bodywork repaired or replaced. A new canopy frame with metal coving panels along the roof line was made. A new canvas canopy and painting completed the restoration. The axles and wheel bearings were worked on by BPSWA members, who attended to the transport to and from Naval Base.

What is needed to take the horse bus from static to operable status? People certainly like the idea of experiencing a ride in a 100 year old vehicle with horses. But a further $7,000 (at least) would be needed to return the rear worn axle and supports to as new condition, make adjustments to the wheels, fit a timber shaft at the front for a two horse team, and provide bridles, reigns and harnesses to meet statutory requirements. The Clydesdales and driver are, of course, extra but available! 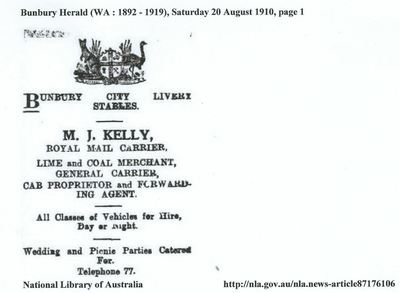 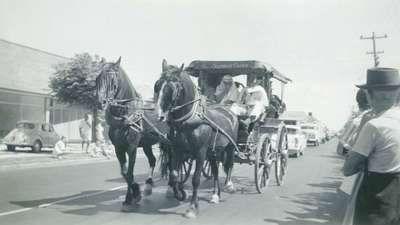 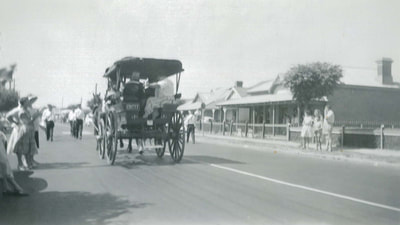 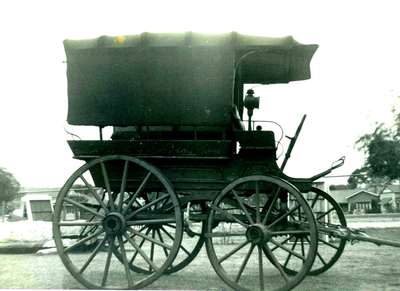 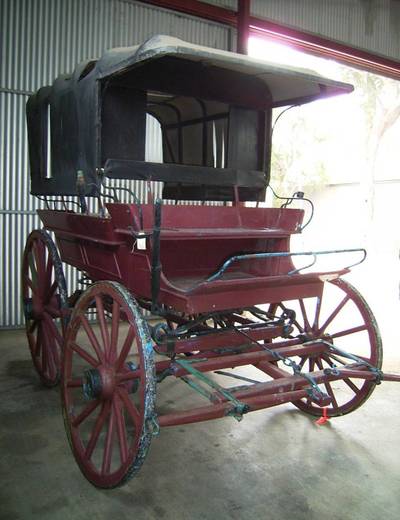 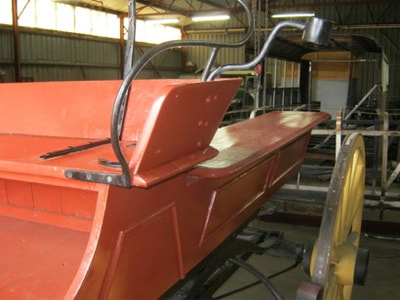 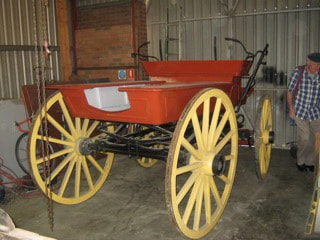 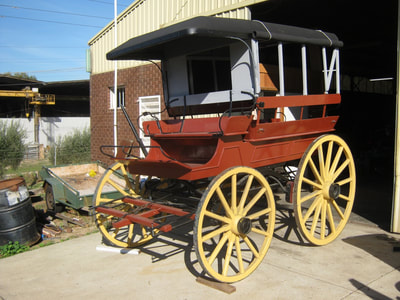 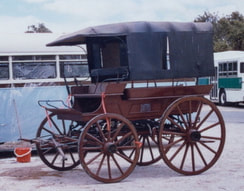 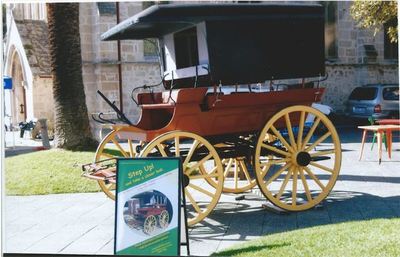