One of the biggest tragedies for buses as they come out of service and are sold off by the Bus Companies (at least from a 'restorers' point of view)  is that they are often gutted and the seats and other unwanted fittings are discarded as the owners ambitions are aimed at creating a mobile home, workshop or storage area and open space is the first order of the day?.  In the case of SBS15, she came out of service in the '50's and was used as a mobile workshop on a farm and as shearers sleeping quarters.  Consequently, there were no seats in the bus  when it was acquired by BPSWA, and very few seats from this period could be found. After considerable searching an old Emu Bus Company 'wreck' of the same era was located in Byford with a few seats still intact.  This was purchased by the Society and brought to the Workshop. It was dismantled, with most of the body collapsing as work progressed at extracting the seats.  We were after the seat frames and some idea of the upholstery style of that age.
These were recovered and templates made of the seat frames.  One of our long time members (with his own workshop at home) fabricated new bases and frames for each seat.  The squabs and seat backs were fabricated by "Bill Morgan Upholstery Service" with all seats now completed and stored, waiting for the internal fit out.  ​The squab and back for the driver's seat was generously donated by Bill as his contribution to the final project. (see the single seat below).
Seat Sponsors
In addition to Bill Morgan's sponsorship of the drivers seat, each of the seats has been donated by a sponsor and will have a small plaque fastened to the back of the seat upright in recognition of this contribution.  These contributions will also be recognised with a Certificate of appreciation presented to each sponsor on completion of the project. 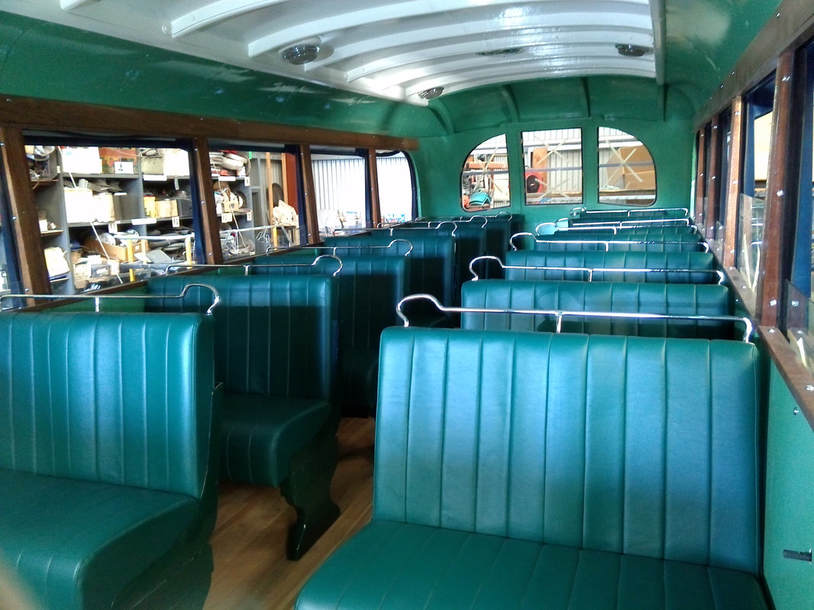 Special plaques will be attached to the seats acknowledging the generosity of the sponsor.
back to the collection gallery