The prototype hydrogen fuel cell bus, a left hand drive Mercedes- BenzO405ENH having been demonstrated to Transperth in Perth in 2000, three Mercedes-Benz model O530BZ “Citaro” hydrogen fuel-cell buses were used in Perth between 2004 and 2007 as part of an international trial to study the operation of alternative energy driven buses. .
The Government of Western Australia’s Department for Planning and Infrastructure (DPI) funded the Sustainable Transport Energy for Perth (STEP) project for $9.95 million, the Federal Government provided $3.25 million, whilst BP contributed about $3 million for the hydrogen supply and refuelling infrastructure. BOC at Kwinana took the hydrogen gas produced by BP Kwinana and refined the gas to 99.999% purity and compressed it to 350 bars pressure (about 350 times atmospheric pressure) before transport by special road tanker to Transperth’s Malaga bus depot.
Perth was the only city in the southern hemisphere in which these buses operated. Other trials were conducted in Amsterdam, Barcelona, Bejing, Hamburg, London, Luxemburg, Madrid, Oporto, Reykjavik, Stockholm and Stuttgart under “CUTE” (Clean Urban Transport for Europe) and “ECTOS” (Ecological City Transport System) projects.  For further information see http://www.transport.wa.gov.au/19525.asp
A DPI diagram, produced when the buses were operating shows the hydrogen tanks were attached above the roof at the front of the bus, with the fuel cells mid-way above the roof and the air-conditioning (for fuel cells and passengers) near the rear of the bus. The refuelling point at the rear of the bus was electronically monitored.
Although the 3-year trial of the Ecobuses was a success, it showed that:-At the end of the 3 year trial, the fuel cells were removed and returned to Daimler/Chrysler, Ecobus 2 was donated to the Bus Preservation Society of WA and the other two buses were dismantled to yield parts to be use din the maintenance of other Transperth buses because it was not economic to convert them to diesel or CNG power.
The Hydrogen Fuel Cell
Diesel and Compressed Natural Gas (CNG) engines are internal combustion (IC) engines and they burn fuel with oxygen (from air) inside cylinders. The heat produced the rapidly burning fuel causes the gases to expand and force the pistons down, turning the crankshaft and the vehicle’s driving wheels.
Each Ecobus used two Proton Exchange Membrane (PEM) fuel cells developed by Ballard of Canada, in which hydrogen under high pressure entered the cell’s anode, where the hydrogen lost its electrons to the anode and the remaining positively charged hydrogen ions (which are protons) passed through the exchange membranes to the cathode. At the cathode electrons are supplied from the external circuit causing the hydrogen ions (protons) to react with oxygen (from the air) to produce water vapour (steam).
Because the electrons released at the anode have to travel through an external circuit containing the main drive motor and switching controls to reach the cathode, this was the electric current which can drive the Ecobus’ main motor and its auxiliary electric motors for brake pressure, air conditioning, gearbox hydraulic, lighting etc.
When operated by Transperth, the Ecobuses required special licences as they were 2.55 metres wide (normal vehicles width limit is 2.45 metres) and due to the extra strength built into the bodies to carry the roof weight, the buses were limited to a maximum of 59 passengers – 30 seated.# (Header photo by Nick Pusenjak For a summary of the outcomes of this project see the ABC article " Why Perth's eco-buses have been consigned to the scrapheap".) 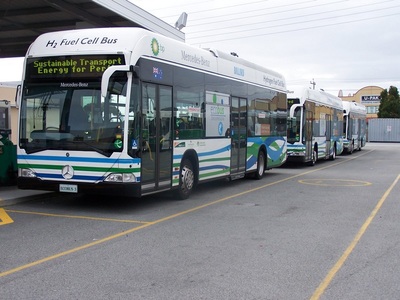 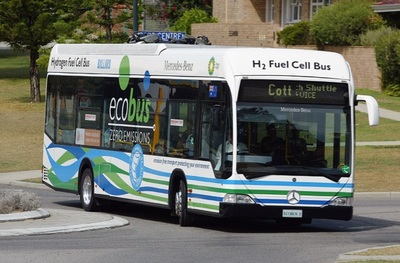 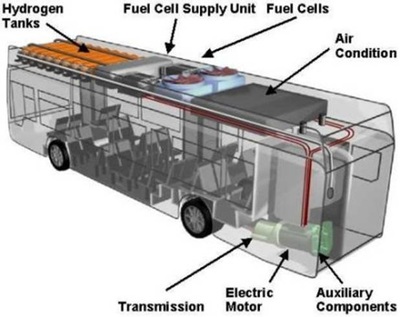 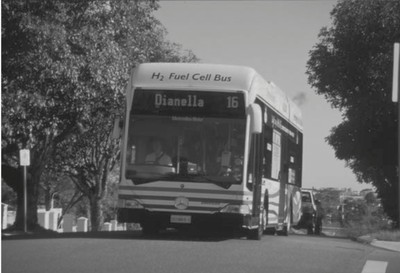