Between 1970 and 1974, the Metropolitan (Perth) Passenger Transport Trust (MTT) bought 127 of these under floor rear-engined buses from the Japanese maker, Hino. The purchase was influenced by the Federal and State Governments, which were pursuing suitable means of effecting some ‘balance of trade’, mainly to off-set the substantial export of raw materials to Japan at a time when Australia’s primary economic ties were with Britain.
Although derived from Hino’s ‘Blue Ribbon’ series of heavy duty city buses, the RC520P was specifically tailored (that is, modified) to meet the MTT’s requirements. A key feature was incorporation of a British designed 4-speed semi-automatic gearbox. This was in common with a large proportion of buses then in the MTT fleet, including 127 similar looking Leyland Panther buses purchased simultaneously with the Hino units. No 83 was one of the final handful of these Hinos to enter service with the MTT, on 24 December 1974.
Like most of its siblings, 83 had a relatively short career with the MTT (later rebadged as Transperth) being withdrawn on 2 May 1989. This was largely due to inferior durability / reliability compared with the equivalent Leyland Panthers. Hino 83 was sold to an operator in Margaret River for further service as a school bus, and subsequently continued its passenger-carrying activities with Mandurah Bus Charters and BusWest until the latter company generously donated the bus to the Bus Preservation Society for use as a ‘working exhibit’.
In August, 2010, following repairs to an air leak traced to its gearbox, 1974 Hino RC520P, MTT 83, was driven to Kewdale for repainting in white over buttercup yellow.  Immediately after it returned to Whiteman Park some 5 days later, work started on applying signage to transform 83 to represent one of 2 Hinos (932, 933) which the MTT painted in the special yellow livery and used on the initial City Clipper route in the Perth CBD.  Repainted to replicate as closely as possible one of the pair of Hino units  which inaugurated the very first of the MTT’s innovative and trend-setting ‘City Clipper’ free bus services that traversed Perth’s CBD from 1973 until the equally popular CAT (Central Area Transit) buses took over in 1996. Hence 83’s current guise as the slightly older Hino numbered 933, even though 83 itself almost certainly never actually operated on the yellow City Clipper service. 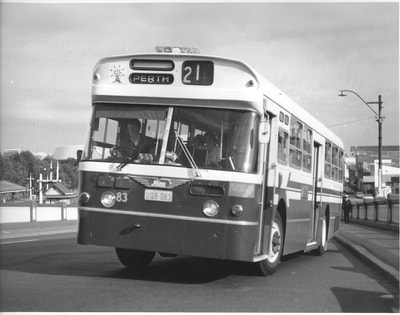 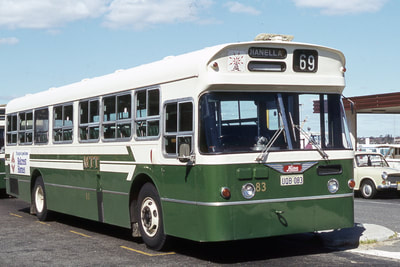 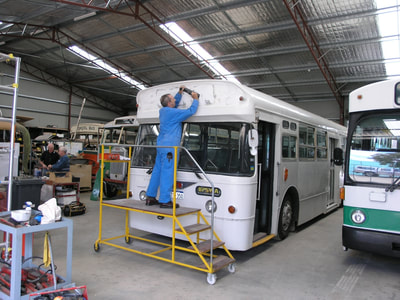 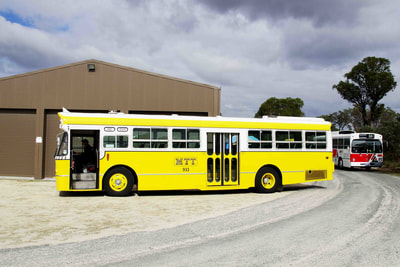 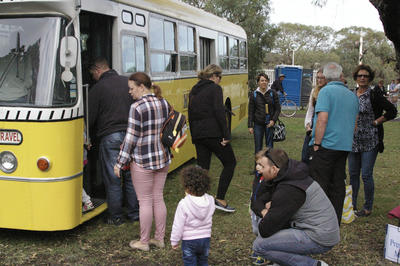