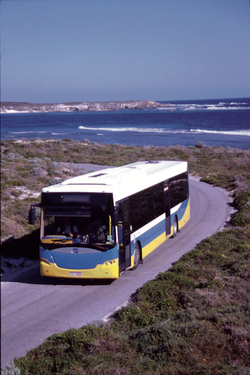 TC 5905 is one of two BCI model PK6120AG buses acquired new by the Rottnest Island Authority last year for their Bayseeker bus service. It is in the scenic Salmon Bay area on 19th October 2009. Colour transparency by Nicholas Pusenjak
There is something about islands that attracts me. Rottnest is no exception. Perhaps it is the atmosphere derived from being away from the hustle and bustle of the mainland. For me it has everything, - relaxation by the sea in a temperate climate, knowing one can forget commitments for the duration of the holiday, exercise with cycling and swimming, fishing – I am usually successful in catching a feed, sea travel to and from, a railway and of course, buses.
Not much is known or documented about the first buses on Rottnest and they do not appear to have been photographed. I first went to Rottnest as a child in the late 1950’s and the trip to and from on the ferry, the MV Islander, an ex World War II Fairmile Type B motor launch was a fabulous experience in its own right. But I am digressing.
The main wharf at Thomson Bay had not been built and the ferries from the mainland used the Army jetty around the bay. “Buses” known as charabancs awaited the Islander to convey passengers to the settlement and the Basin, a popular swimming spot. These were trucks with perimeter seating along the sides and steps at the rear end. I recall forward control Austin K8 and FE models and normal control vehicles, possible Fargo. All ran on four tyres, the outer wheels on the dual axles missing and the hubs protruding.
​Bedfords were very much in existence on the Island when I next visited, mostly Commonwealth Aircraft Corporation bodied SBs, plus a bus with an FE model Holden radiator grille owned by MacRobertson Miller Airlines (MMA) which operated an air service from Perth (Guildford) Airport to Rottnest using Douglas DC3 aircraft. This bus was absorbed into the Rottnest Island Board of Control’s (RIBC) fleet when MMA ceased its service to Rottnest.
An interesting phase for Rottnest occurred in the mid 1970’s when six Guy Arabs went to the Island. Technical and spare parts support was provided by the MTT which put an embargo on the disposal of Guy parts whilst the Guys were operated by another State Government agency.  The opportunity to replace the somewhat dated looking half cab Guy Arabs with buses of more modern appearance occurred in 1978 when seven of the MTT’s eight Albion Viking VK41L buses were drafted to Rottnest and the Guys came back to the mainland.  Leyland Tiger Cubs replaced the Albions in the mid eighties and eleven Cubs are recorded as having worked on Rottnest.
The next generation of bus for Rottnest and one of the most pleasant for passengers was the rear engined Hino RC320P. With all forward facing coach type seating these quiet smooth riding buses gave excellent service. Nine Hinos operated on Rottnest between 1988 and 2006.
Ex MTT/Transperth Mercedes Benz O305 buses came to Rottnest to replace the Hinos and at the time of writing two are still on the Island, but generally only see service on school or group charters or in peak periods. Others have been cannibalised for spare parts by the Rottnest Island Authority (RIA).
Small buses have supplemented the larger buses for over 30 years, with Mazda Parkway, Toyota Coaster, Mitsubishi Rosa, Nissan Civilian, noisy front engined Mercedes Benz 815D Varios and a Hino RB8.
It would appear the era of second hand buses cascaded down from MTT and Transperth services on the mainland is drawing to a close. Austral Domino buses have operated on Rottnest and it is understood buses may be hired from private operators on the mainland to cover the summer peak season. Perhaps some of these may be former MTT/Transperth units coming via a third party.
The principal service operated by the RIA is the “Bayseeker”, a regular service that operates around the Island dropping passengers at bus stops at various locations. Two BCI model PK6120AG cover this service which operates on an hourly basis during the cooler months and half during the summer or peak season. A free bus service is provided to the outlying accommodation areas of Geordie Bay/Longreach Bay west of the main settlement and Kingstown to the east. Smaller buses often towing a luggage trailer are use don this service.
The Mercedes Varios are used for the Island Tours which operate to the West End and deviate to the various points of interest on the Island and the new Hino RB8 operates tours with an Aboriginal theme.
Current Rottnest Fleet List
Comma separated to - Make and Model, Registration, Transperth, Date to Rottnest
BCI PK6120AG, TC 5905, - , 2008
BCI PK6120AG, TC 5906, - , 2008
Mercedes Benz O305, TC 4230, 423, February 2006
Mercedes Benz O305, TC 4237, 434 Late 2005
Mercedes Benz 815D, TC 4238, - , October 1999
Mercedes Benz 815D, TC 4232, - , September 1999
Mercedes Benz 815D, TC 4235, - , October 1999
Mercedes Benz 815D, TC 4234, - , October 1999
Mitsubishi Rosa, TC 4231, - , 1999
Nissan Civilian MGW40, TC 4236, - , 1999
Hino RB8, TC 6160, - , 2009
Former MTT / Transperth Buses Used on Rottnest
Comma separated to - Make and Model, MTT, Rottnest, Rego, On Island
Albion Victor VT17BL, 1, 38, XZC 825, 1978 - 1986
Albion Viking VK41L, 2, 39, XZC 826, 1978 - 1986
Albion Viking VK41L, 3, 30, XXT 766, 1978 - 1986
Albion Viking VK41L, 4, 32, XZC 665, 1978 - 1986
Albion Viking VK41L, 5, 31, XRW 863, 1978 - 1986
Albion Viking VK41L, 6, 33, XZC 666, 1978 – 1986
Albion Viking VK41L, 8, 34, 6EA 973, 1980 – 1986
Albion Viking VK41L, 9, 35, 6EA 974, 1980 – 1986

Gallery of Images Accompanying the Article
(Captions display on Hover) 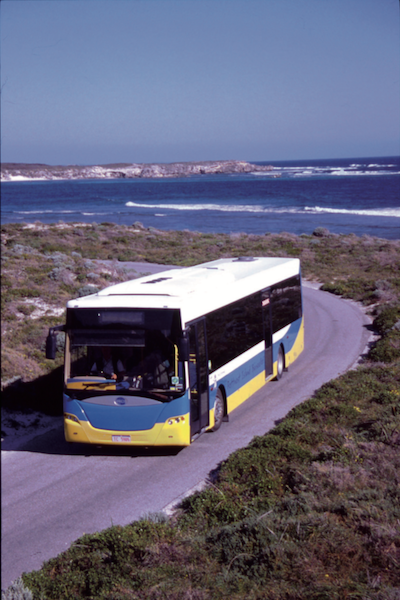 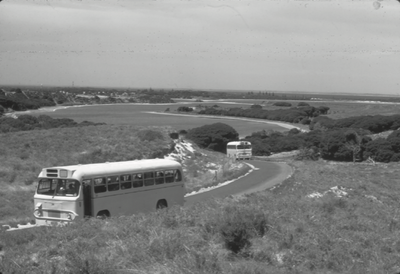 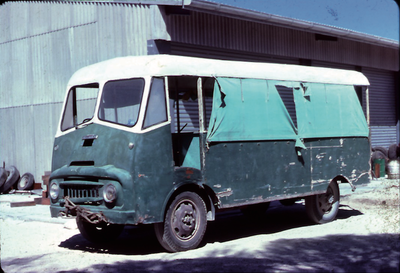 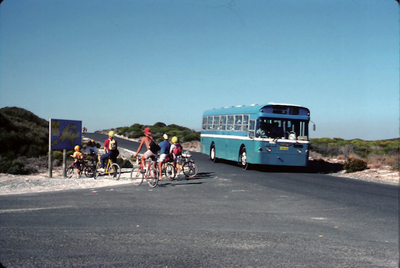 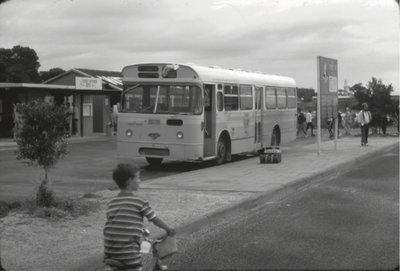 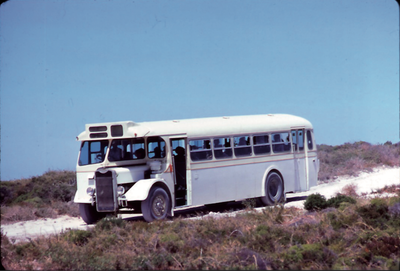 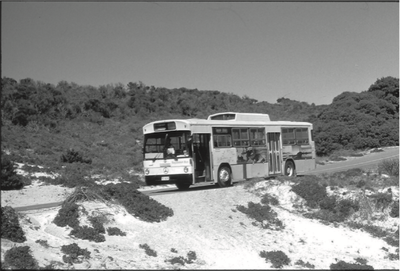 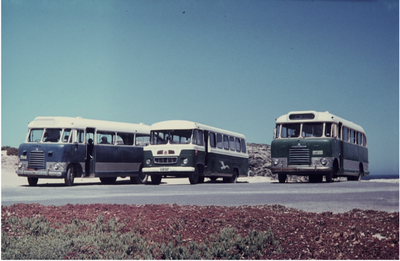